ASHAR ALO was an initiative by some energetic youths for providing responses to uplift moral values at last south-west part of Bangladesh in 1994. Although during British Government, the area was declared as a municipality at 1867 within the Indian sub-continent, the area did not advance towards modern life-lights. Rather it has backward day by day in education, cultural and socio-economic status for being attached with 137km. Indian border, religious leadership, artificer shrimp culture and ignoring manner of existing govt.

So, for meeting up of time demands, the rationality of AHAR ALO was increasing at the area. In 2001, the organization is established perfectly as a non-political & non-profitable community based service delivery organization through the registration of Social Welfare Department and later NGO Affairs Bureau of Bangladesh. Now ASHAR ALO is response to the needs of the socio-economic emancipation of distress, deprived and underprivileged people mobilizing available local resources especially  manpower, water, soil and community experiences. As well as ASHAR ALO intends to develop of efficiency culture  in economy through human resources development bringing women in mainstream of improvement enhance human dignity, brotherhood and social justice in its operation areas.

Establish an environment of friendly and plateful society with gender, cast and class equal.

ASHAR ALO envisages that the transformation of existing realities of life easy process and in the context of Bangladesh viz: social justice, human security violation of rights safe environment, economy sustainability addressing the eight context of MDG especially focusing on women and children it is product to address the process to change the society as of the needs.

Name of Network / Forum : Network for Empowerment of Windows(NEW)

Ministry of Woman and Child Affairs had taken various social safety net program with the assistance of  Mohila Bishoyak Odhidaptor. One of the important program is Vulnerable group development (VGD. Vulnerable group development (VGD) is an Ultra poor household development program. Ashar Alo organization got Vulnerable Group Development Program (VGD)  2015-2016 cycle. Projetc area is Asashuni upzailla under the district of Satkhira. Project activity started March, 2017 and will continue 31 December, 2018. Under the project various activities are running, which are; Life Skill education, income generating skill development training, deposite savings, assist food distribution activities and will create opportunity to get loan etc). under the project involvement beneficiaries awareness will be enhance, skill development will be increase, will increase their financial and social empowerment and will involve national main truck of sustainable development. 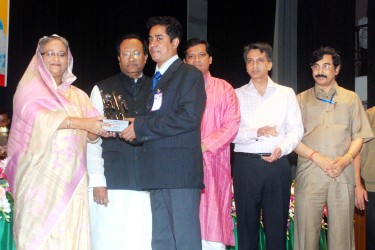